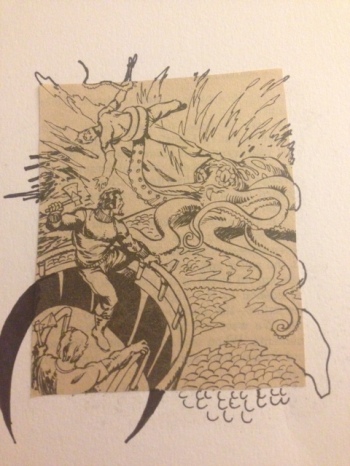 When life comes at you like an antediluvian blood-thirsty invertebrate follow Captain Nemo’s lead: grab yourself a tomahawk. Growing a beard or drawing one on your hairless face might also help you out.

The Texas road trip clocked in at just over 3,000 miles. Roughly three cases of craft beer were consumed and seven miles of river were kayaked/tubed down. Nine thunderstorms were braved and one wild boar peed on our tent. One concert was attended with two bands you may like: Yellow Ostrich & Alex Napping. Much laughter was had and even more mold spores were spread throughout the battered fabric interior of my Honda Civic. I was also subjected to BioShock style plasmid experimentation in Pedernales Falls State Park. My bee powers are slowly blossoming.

Back on the ranch At Eternity’s Gate continues to be mercilessly edited. Fifty-two unnamed heroes were slashed from existence, or really, just integrated with another group. A transformation of one character’s helmet has taken place, from a typical sci-fi space pilot helmet to that of a smooth and sleek killer whale head, and every scene involving this character now has to be adjusted. Oh, the things we do for the sake of mystery and seemingly illogical badassery. There are roughly eighty pages left to be edited/rewritten before, you know, I read through the thing again and jam my frantically anxious surgeon fingers into its guts.

It may do well to note that I’m not a “draft” guy. Every chapter was constantly reread and edited as I moved forward with the original writing. Now any unassuming sentence dwelling in my narrative is subject to random and quasi unethical augmentation. Sometimes deletion is necessary. Sometimes every other paragraph must be reworked to incorporate a futuristic whale helmet. So it goes.

However annoying the whale helmet thing may appear to be, I’m actually pretty stoked about it. In fact I will be cosplaying this character next month at Dragoncon in Atlanta. More on this later, but if you’re romping around downtown Atlanta keep your eye out for an orca whale.