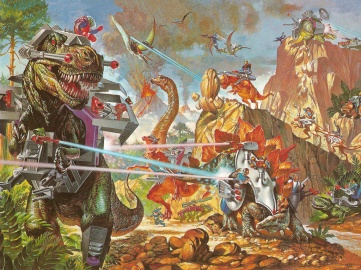 I had a great post whipped up about writing and editing and the passage of time, but honestly I don’t feel like crafting that sort of post right now. The wonderful thing about working with the written word is that you can create whatever you want. Lately I’ve felt as though I have to write captivating lecture-esque posts about the craft of fiction so that people will come to this site and learn something. Maybe even check out the book I’m working on and fall in love with it, recognize it as bonafide surrealist sci fi literature. That’s not what I should be doing though, and who am I to teach you anything anyways? Put mildly, it’s not as if I’ve obtained literary enlightenment.

So instead of the aforementioned boring post full of borderline pretension and the acrid scent of academia that makes me puke up skittles and motor oil, I’ve written a potentially meaningless article on the logistics of engaging in prehistoric warfare with advanced laser weaponry grafted to blood-thirsty dinosaur skulls.

It would seem obvious that pterosaurs have a distinct advantage over most dinosaurs on account of their ability to fly, but that’s not entirely the case. Their ability to take cover in clouds and dive bomb targets with mini-guns and photon cannons may have you wrapped up in squawking beaked romanticism, but it comes at a price. Prehistoric winged reptiles like the ever popular pterodactyl (which aren’t technically classified under the moniker of dinosaur) can fly, of course, but this means they can’t carry heavy armament. With the added weight of ammunition and a potential pilot it’s unlikely that you’d be charging into full fledged reptilian combat on one of these winged beasts, and more likely that you’d be escaping the slaughter grounds with them. 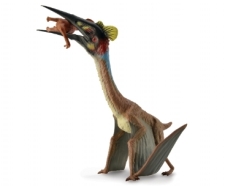 I’ll note that there are some exceptions in the pterosaur department, namely the mother fucking quetzalcoatlus, which stood nearly as tall as a giraffe with a wingspan of over 50 feet. We’re talking about the embodiment of a sacrificial mesoamerican diety here. This thing could carpet bomb your squad and then remove your face from the rest of your limbless body with its gargantuan murder beak while filling your jeep up to its ceiling with Cretaceous era bird piss.

Let’s move on to the ground dwelling terrible lizards commonly referred to as dinosaurs. We’re talking about all your classic sauropods and theropods here. The major dividing lines are drawn between carnivores and herbivores and bipeds and quadrapeds. Bipedal carnivores consist of the infamous tyrannosaurs rex and velociraptor (as well as it’s larger cousin the utah raptor), and some lesser known meat eaters like cryolophosaurus and dilophosaurus. It’s not difficult to imagine the helpless arms of your enemies flailing from the sides of your war-hardened Jurassic combatant while it decimates a helicopter with the rocket launchers strapped to its back.

Total meat eating carnage aside, two legged herbivores aren’t as poor a choice as you might think. These dinosaurs typically traveled in herds, so you could find yourself standing in front a formation of over a hundred dinosaurs ranked side to side. You’d have iguanodons twiddling their spiked thumbs, eager for some eye gouging, and the parasaurolophus would bellow out the signal to charge from its epic battle crested horn. 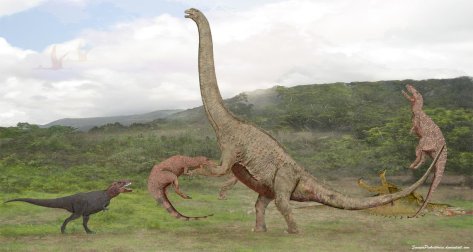 Terrifying as that sounds, being crushed underneath a 100 ton behemoth is just as awesome. Apatosaurus (formerly know as brontosaurs) belong to that group of herbivores with four tree -trunk sized legs. Monsters like Argentinosaurus were over 95 feet in length, so it doesn’t really matter that they grazed on leaves and grass, because they’d straight tail whip a velociraptor to another continent. Add on a few tank barrels, machine gun turrets and mortar tubes and you have the most heavily equipped reptile on the playground.

If you survive any sort of dinosaur battle you should congratulate yourself, take a vacation and probably file a lawsuit against InGen. You’re more likely to achieve reptilian domination with the knowledge you just gained, so yeah, you’re welcome. I’ll catch you all on those prehistoric plateaus and extinction boundaries, riding on a weaponized Argentinosaurus.